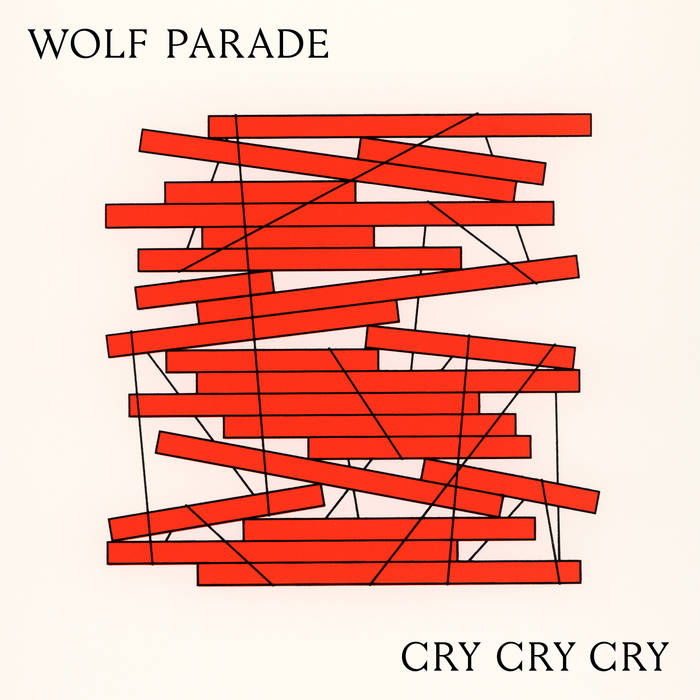 The soaring choruses, rousing anthems, sprawling guitars and chaotic keys that make up Wolf Parade are on proud display over the course of Cry Cry Cry, the band’s thunderous first album in seven years.

That unique combination of sounds and influences, spearheaded by electric co-frontmen Spencer Krug and Dan Boeckner—a complex yet relatable, energetic brew of glam, prog, synth-rock, and satisfying discomfort—helped define 2000s indie rock with three critically celebrated albums, and propelled a growing Wolf Parade fandom even after the band went on a then-indefinite hiatus in 2010.

The upcoming return marks their first to be produced by Pacific Northwest legend John Goodmanson (Bikini Kill, Sleater-Kinney, Unwound) at Robert Lang Studios outside of Seattle, and is accompanied by a renewed focus and the creativity of a band that took their time getting exactly where they needed to be. It’s also a homecoming to Sub Pop, which released all three of the band’s previous albums.

“The band itself is almost a fifth member of the band, something more or at least different than the sum of its parts,” says Krug. “We don't know who or what is responsible for our sound, it's just something that naturally and consistently comes from this particular combo of musicians.”

“Once we got back together, I was playing guitar, writing and singing in a way that I only do while I'm in Wolf Parade,” says Dan Boeckner, who shares primary lyrical and singing duties with Spencer. “It’s just something that I can't access without the other three people in the room.”

In the time apart, the band scattered geographically and focused on family and other work--Spencer on his solo project Moonface, Dan on his bands Handsome Furs, Operators, and Divine Fits (with Spoon’s Britt Daniel), and Dante De Caro on records with Carey Mercer’s Frog Eyes and Blackout Beach. And that time allowed for an even stronger, tighter band to emerge.

Eventually, Spencer, Dante, and Arlen found themselves all back living on remote Vancouver Island, accompanied by a population density less than that of Alaska, and the tranquility that leads to creative emanations like a government-sponsored bathtub race. With Dan on the same coast in Northern California, discussions began about picking things up where they left off.

“All of our albums are always a reaction to our last one,” says Arlen. “Expo 86 (2010) was about as sparse as we get, which is usually still pretty dense, and this time we wanted to make the palette a little larger.” Adds Dante, “Expo was a real rock record. We just sort of banged it out, which was kind of the point.” Cry Cry Cry, on the other hand, is more deliberate in its arrangements and embrace of the studio process. “If a part was going on for too long it would get lopped, you know?” says Dan. “That being said, there are two very long songs on the record and I don't think it would be a Wolf Parade record if it didn't have some kind of prog epic.”

“I think we're actually a better band than we were when we stopped playing music together,” says Arlen. “A little bit more life experience for everybody, and people having made a bunch of records on their own.”

The result of this new consciousness is songs like “Valley Boy,” a Bowie-inflected anthem for which Spencer wrote lyrics after Leonard Cohen died the day before the 2016 election (“The radio’s been playing all your songs, talking about the way you slipped away up the stairs, did you know that it was all gonna go wrong?”). “You’re Dreaming,” also influenced by the election and the spinning shock that followed, is driving, urgent power pop that draws from artists like Tom Petty and what Dan calls one of his “default languages” for writing music. The swirly, synth-heavy crescendo of “Artificial Life” takes on the struggle of artists and at-risk communities (“If the flood should ever come, we’ll be last in the lifeboat”).

The album carries a sense of uprising that is not unrelated to Wolf Parade’s renewed determination to drive the band forward in uncertain times. Welcome to Cry Cry Cry.

All right
Let’s fight
Let’s rage against the night